The Story 14. A Kingdom Torn in Two 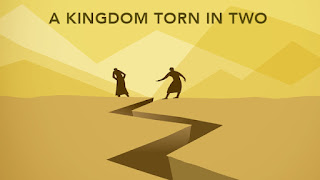 In the history of the United States one of the defining historical periods is that of the Civil War. In the story of the Hebrew people there is also a civil war that divides the South from the North.

Here at Mount Hebron have been reading a chronological version of the Bible called “The Story”. We have reached a point in our journey when God's people have had their first taste of what living under a monarchy felt like. Their first King, Saul, had not been wonderful, but under King David the nation had prospered.

Following King David came his son King Solomon, who started out well, but finished abysmally. Though in many ways Solomon was a wise King, his wisdom did not lead him to be faithful to God, but into balancing his extravagant national budget on the backs of the people he was supposed to serve. His relationships with an unnecessarily large number of wives and concubines led to him adopting pagan practices that led him away from true religion and into idolatry.

Chapter 14 of  “The Story” titled “A Kingdom torn in Two” covers the first book of Kings chapters 12 through 16. It is a time in the life of the Hebrews characterized by brief periods of faithfulness and long periods of unfaithfulness.

During Solomon's reign, two leaders arise. The first is Rehoboam, Solomon's son and the rightful heir to the United Kingdom. The second, Jeroboam was a rising star in Solomon's administration, who made an unsuccessful bid to seize the throne before fleeing to Egypt.

Solomon dies and his son Rehoboam takes over. He is given some advice by his elders, that if he really wanted to take charge, then he should lighten the burden his father had placed on the peoples shoulders. Instead he takes the advice of his peers and says “No way! I'm going to make it harder for them, not easier. That'll show them!”

So the people appeal to Jeroboam (the one who had fled to Egypt) “We need your help. Rehoboam has turned out crazier than his dad Solomon.” The scene is set for a major confrontation, a civil war,  which results in a divided Kingdom. Rehoboam becomes King of the smaller Southern Kingdom - Judah, while Jeroboam becomes King over a federation of tribes that take the name “Israel” and become the Northern Kingdom, also known as “Kingdom of Samaria.”

Throughout our series on “The Story” we have been thinking about how within Scripture there is both a“Lower Story” and an “Upper Story.”  The “Lower Story” is about how humanity, in every generation, fails to grasp this idea that God can be trusted and instead blunder from one tragedy to the next carrying with them a sense that God has nothing to say and nothing to offer their lives.

The “Upper Story” is the constantly unfolding theme throughout the 66 books of the Bible that God is preparing a people to reflect God's loving purposes to the world. Whenever people act in faithful response to God's call, even if they are only a remnant, the result is always blessing.

We sometimes think these Old Testament tales from long ago have little to offer us. Dig deeper and we will find great insights into the nature of faith and unfaithfulness.

Consider the first King of Judah, Jeroboam. His life is directed by fear rather than faith.  We are told that Jeroboam is afraid that his enemy in the North, King Rehoboam, will turn the people back to God and that they will become so powerful that it will lead to his defeat. So what does he do? Rather than turn to God, he sets up a whole alternative framework for his life that effectively, counteracts the influence of the one true God who was seeking his faithfulness.

In a society where religion is not considered a priority we need to recognize that there is a huge pressure on us to not be people of faith. We need to work at creating a framework of faithfulness in which we can live out our lives. We need to recognize that our choices can be made out of the fear of not keeping up with the trends and fads and expectations of our society, rather than be formed by our faithfulness to God.

Consider the way we raise our kids. We want the best for them. We invest in college funds, we take them here there and everywhere and give them what we believe they need to succeed in this life.

But then we come to those areas where we have to choose. Do I let them do this activity, if it means they can't be involved in a church activity? Do I send them to this science or sports or arts camp, that might help them get into college, or do I encourage them to attend a faith based camp, which might not help with college, but could significantly impact their spiritual development?

Many, many, people will choose the secular option over the spiritual one because they fear their kids might be missing out on the kind of advantage to move them on in the world. Somehow we worry more about them missing out on secular things than spiritual things. We all, subconsciously, have a framework that guides our choices. And for some of us, despite our involvement with church, church is not number one on our list.

In Jeroboam's life, when he is confronted about his choices, he goes into denial. In our Old Testament reading, as he stands by one of the idolatrous altars he has created, he is told that what he is doing is wrong. When he lashes out at the prophet who tells him this, his hand withers up. So he begs the man of God, “Please heal me, please help me.” His hand finds healing as the altar he has built falls apart before his eyes.

But does that set him back on the right path? We read in 1 Kings 13:33 “Even after this, Jeroboam did not change his evil ways.” That's a common phenomenon in our society. Something bad happens and people get religion for a while. They get what they need and  then return to living just like they always had.

Do not underestimate the power of whatever framework we are investing our lives in. If our ultimate aim is to be comfortable, or to be prosperous, or to be happy, to have the best in worldly opportunities... whilst in themselves these are not bad things... nevertheless they can totally take precedence over being faithful disciples of Jesus Christ. And Scripture has a name for any desires or motives that take precedence over seeking God's will. Idolatry. Idolatry is enthroning other things than what God desires for us in our hearts. When Jeroboam's son Ahijah becomes ill, he again seeks the help of the one true God. But this time it is too late. His son dies. The harsh lesson is that our actions, our 'framework' creates consequences.

In the North, in Israel, the list of Kings begins with Rehoboam. Despite Jeroboam's concern that Rehoboam would return from Egypt and seek the God of David, he does nothing of the sort. Instead he, in the words of 1 Kings 14:24; “Engaged in all the detestable practices of the nations the LORD had driven out before the Israelites.”

He cares so little about the religious heritage he has received from King David that when an Egyptian King called Shishak invades, he let's him take all the gold from the temple and Rehoboam replaces it with bronze. “Well it's only a temple! Why waste good money on that?” Why give of your best to your church, when second or third best will do just fine?

That is the heritage he has received from his father Solomon. From Solomon's pagan wives he learned idolatry. The framework we are living our lives in, doesn't just impact the lives of our immediate family, it guides the lives of the next generation.

So here's another challenge. What kind of Christian heritage, what kind of legacy are we leaving to those who come after us? If they take on our priorities and our values... not the ones we give lip service to... but the ones we actually live by... what is that going to look like?

This litany of the Northern Kingdom's unfaithfulness reaches it peak in King Ahab – Son of Omri.  1 Kings 16:30 “Ahab son of Omri did more evil in the eyes of the LORD than any of those before him.” Some weeks ago the choir sang to us how “Joshua fit the battle of Jericho and the walls came tumbling down.” What happens during Ahab's reign? Jericho is rebuilt and a god descended from Jericho's pantheon called “Baal” becomes the focus of the nations religious life.

During the divided Kingdom, a period that lasted for 344 years from 930-586 BC there were 38 Kings. Only five of them followed God. Only five! But during the reigns of those five Kings, people prospered. God rewards faithfulness. Under those five faithful leaders, Asa, Jehoshaphat, Joash, Hezekiah and Josiah... the Southern Kingdom did well.

Chapter 14 of “The Story” speaks about one of the faithful; King Asa of Judah. We are told “Asa did what was right in the eyes of the LORD, as his father David had done.” We read of him getting rid of the idols. Of how he was not afraid to call his family to faithful living, even when it meant coming into conflict with his grandmother. How he brought into the temple of the Lord the silver and gold dedicated to God's service. When there is a conflict, he seeks God's way through it and his actions result in peace.

And following Asa came King Jehoshaphat, another faithful and exemplary King in Judah who does what is right in the Lord's eyes. His full story is found in 2 Chronicles Chapters 17 through 20. Under his leadership, again, the Southern Kingdom prospered.

We are living in an age where 'Faithfulness to God' is not number one on the list of many peoples priorities. Idols come in many forms. Consumerism drives us to believe it is possessions that offer us what we need, but in the end, the drive for possessions, possesses us. Political campaigns encourage us to make the nation great. But the 'greatness' that is spoken of has nothing to do with the greatness that Jesus outlined through His life of service and self-giving and lifting up the poor and befriending the stranger.

We say we only want the best, but often... at least subconsciously... believe that the best means the best standard of living or the best opportunities or a host of other things other than “Faithfulness.” I fear we often confuse the “Best” with meaning the “Most.”

There's a lot to consider in this chapter about the divided Kingdom. Do our lives reflect a framework of faithfulness? Or are we making our priority secular priorities? What spiritual legacy are we leaving to those who will come after us? What is really important for the lives of our selves and our families?

Don't be afraid to be identified with the faithful remnant. In the bigger picture, in the “Upper Story” the faithful  are the ones who get to really experience the blessing of God in ways that the “Lower Story” folk can never even understand. Take courage. If we find our story in God's story it will give our life a framework that is out of this world!