The Story 13. The King Who Had It All 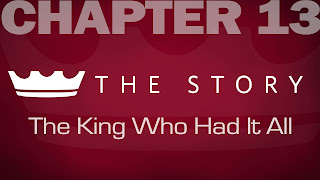 In 2011 the singer Adele had a worldwide hit with a song called “Rolling in the Deep.” It is instantly recognizable when she belts out the chorus... “We could have had it all.” The song was written as a response to a failed relationship that was dragging her down.

Such could be a fitting theme song to the life of Solomon, a King who seemingly could have had it all, and then some... but, partly through some bad decisions and relationships in his personal life, he loses so much.

Solomon's achievements are without a doubt, simply dazzling. He was dazzlingly brilliant. When he is invited by God to ask for anything that would help him in his reign, Solomon asks for wisdom.

One of the first stories we read about him is his adjudicating between two women who are arguing as to which is the true mother of a child. “Bring me a sword” he says, “I'll cut the baby in two and you can have half each.” The true mother immediately, to protect her baby, says, “No. Let the other woman have the child!” Solomon concludes that the one who wants to protect the child is the baby’s true mother.  And he is right!

Solomon is described as having a dazzling knowledge of just about any topic under the sun. We read 'He spoke about plant life, from the cedar of Lebanon to the hyssop that grows out of the walls. He spoke about animals and birds and reptiles and fish.” He is a walking encyclopedia.

He collects together a vast collection of wise sayings and songs that become known as the biblical book of Proverbs. Across the centuries they continue to instruct people in the way of wisdom. Many of them have made their way into our minds and our culture without us even realizing that is where they originated from.

He makes treaties and forms alliances that generate prosperity and wealth and maintain peace. Kings and rulers and movers and shakers from all over the world come to visit, including the Queen of Sheba, whose name still today conjures up images of wealth and opulence beyond our wildest dreams.

He builds a dazzling temple, after the directions of His father David, and then tops it off with one of the most dazzling palaces the world has ever seen. Such was the prosperity of Israel in those days that nothing was made of silver, because silver was considered of having little value. Like Adele's talent, Solomon's early reign is simply dazzling. He could have had it all.

There's a problem with dazzling. You know when you are traveling on a country road at night and somebody comes towards you and they don't turn their headlight full beam off? You can't see a darn thing. Dazzling can blind you and disorientate you. Dazzling creates blind spots. And Solomon develops a couple of huge ones. The first had to do with the way his extravagance exacted a heavy toll on the nation.

Years earlier, when Israel had first demanded a King, the prophet Samuel had warned them, “He will take your daughters to be perfumers and cooks and bakers. He will take the best of your fields and vineyards and olive groves and give them to his attendants. He will take a tenth of your grain and of your vintage and give it to his officials and attendants. Your male and female servants and the best of your cattle and donkeys he will take for his own use... and you yourselves will become his slaves.” (1Samuel 8:13-17)

Those words were coming to pass. Solomon's dazzling building program was supported by slave labor and heavy taxation. For the people this became an unbearable burden and it was only a matter of time before revolution was in the air. There can be no peace without justice. As the rich became filthy rich, everybody else became pushed further and further down the food chain. The seeds were sown for disintegration.

The second blind spot Solomon had been in his relationship to his foreign born wives. Many of his wives were taken as a way of creating an alliance with neighboring states and powers. Seems like he had a lot of alliances! 700 wives, plus 300 concubines.

Polygamy wasn't the problem. That was an acceptable part of the culture back then. The problem came when, to pacify his wives and strengthen his alliances, he also took to worshiping the pagan gods of the cultures his wives represented.

The consequence of his actions is that he is told by God  “I will most certainly tear the kingdom away from you and give it to your subordinates.” (1Kings 11:11).

At the beginning of his reign Solomon was told he could ask for anything he wanted. He asked for 'Wisdom'. The problem with wisdom was that he grew wise in his own eyes and his pride got in the way of his relationship with the God who had made all his dazzling dreams come true.

When Jesus began His ministry, He had nothing good to say about those who were wealthy and wise in the things of this world, but knew little of the requirements of God.
He tells a story about a rich man and a beggar called Lazarus. Throughout his life the rich man ignores the plight of the beggar at his door. In eternity he faces judgment for his lack of compassion.

Another time a young man, who has kept the commandments to the best of his ability, comes to Jesus and asks what else he needed to do. Jesus tells him, "Go, sell everything you have and give to the poor, and you will have treasure in heaven.” (Mark 10:21). Jesus even said; “It is easier for a camel to go through the eye of a needle than for someone who is rich to enter the kingdom of God." (Mark 10:25)

In asking for “Wisdom”, Solomon asked for a good thing, but he did not ask for the best thing. Had he truly wanted to prosper the “Kingdom of God” rather than “The Kingdom of Solomon” he would have asked for “Faithfulness.”

In one of the temptations Jesus faced in the wilderness we read that  “The devil led Him up to a high place and showed Him in an instant all the kingdoms of the world. And he said to Him, 'I will give you all their authority and splendor; it has been given to me, and I can give it to anyone I want to. If you worship me, it will all be yours.'  Jesus answered, 'It is written: 'Worship the Lord your God and serve Him only.' " (Luke 4:5-8)

In the parable of the talents, Jesus tells us that judgment comes not with the words, “Well done thou wise and wealthy ruler” but with the words “Well done thou good and faithful servant.” (Matthew 25:23). By the end of his life Solomon had blown it.  Had he in his relationship with God, remained faithful and true, then maybe, as Adele sings “He could have had it all.”

The life of Solomon challenges us on many lives. It calls us to embrace wisdom. To have a faith that is about the head as well as the heart, a mind that seeks to understand and a lifestyle that embraces good practices.

His life challenges us in regard to worship. He holds nothing back in creating a temple that glorifies God. He gives of the absolute best this world can offer in order to honor God's name. When it comes to church, sometimes people give what they have left over rather than the best they have. Solomon put the temple first.

We can learn from his downfall. Worldly wisdom blinded him to the need for justice in the land. His dazzling lifestyle blocked from his view the poverty and oppression that maintained it. Jesus had harsh things to say about those who valued wealth over other peoples need.

Worst of all he compromised the one thing that was most important... his relationship with God. He allowed other gods and desires and idols to take their place in his heart. His commitment was divided.

We come now to this table laid with bread and wine. The Book of Philippians tells us that Jesus, “Made Himself nothing by taking the very nature of a servant, being made in human likeness. And being found in appearance as a man, He humbled Himself by becoming obedient to death-- even death on a cross!” (Philippians 2:7-8 )

Jesus was the one, who as the Son of God, could have had it all. Instead, in order that our lives may experience the forgiveness and love of God, Jesus gave it all. He gave His life as a sacrifice for sin, as atonement for our wrongdoing and as a healing for all our sickness.

So let us seek the wisdom that is from above, the mind of Christ, the guidance of God's Holy Spirit and the love that will never let us go or let us down, to move us one more step along the discipleship road.

To God's name be the glory. Amen.
The Reverend Adrian J. Pratt B.D.