The Story 16. The Beginning of The End 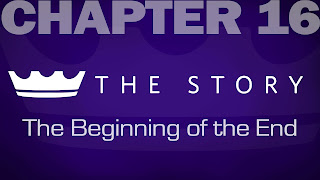 If our lives are on the wrong trajectory, eventually we are going to run into trouble. If we are driving down a dead end road where do we end up? At a dead end!  Magnify that picture and apply it, not just to the individual, but to the Old Testament story of the Hebrews.

Through Abraham, through Moses, through prophets and Judges, the Hebrews are called to walk with God. Through King David the nation became established, but then following Solomon, it split apart. The Northern Kingdom, Israel, is served by a series of idolatrous Kings. They end up being sent into captivity in Assyria. The Southern Kingdom, Judah, have a few periods of faithfulness, but are mostly unfaithful. Judah will end up in Babylon.

As a church we continue our journey through a chronological version of Scripture known as “The Story.” Chapter 16  introduces us to two faithful characters, King Hezekiah of Judah and the prophet Isaiah. The chapter  is titled “The beginning of the End.” It's a chapter about disintegration. It offers a simple perspective. “When things fall apart, get back to the heart.”

Hezekiah was one of the few good Kings during the time of Judah. We are told that “He did what was right” (2 Kings 18:3) and that “The Lord was with him.” (2 Kings 18:7) Doing the right thing didn't mean he therefore lived a trouble free existence.  That has never been the way life works for faithful people of God. Faith is not an insurance policy against trouble. Trouble for King Hezekiah came from the mighty Assyrian army, who, having taken the Northern kingdom of Israel captive, now rage a war of propoganda against the Southern Kingdom of Judah.

The commander of the Assyrians calls out, in Hebrew, (which is Judah's native tongue) “Do not let Hezekiah decieve you. Your God can't protect you from the mighty Assyrians. Give up!”  The commander even steals the words of Moses and promises the Hebrews that if they surrender to Assyria, they will be led  to a land flowing with milk and honey. He uses one of Moses catchphrases “Choose Life.” (2 Kings 18:32)

During World War 2 the German Reich Ministry of Public Enlightenment and Propaganda attempted to discourage and demoralize American, Australian, British, and Canadian troops by brodacasting, on a powerful radio signal, discouraging reports of high losses and casualties among Allied forces. They used the polished English language and voice of William Joyce, 'Lord Haw-Haw', a satirical reference to his posh english accent. Fascinating to see from these ancient texts that there is nothing new about using propoganda as a weapon of intimidation.

The harrasment continues when King Hezekiah receives an intimidating personal letter that spoke of the uselessness of standing against the might of Assyria. If you are a 'Doctor Who' fan, you could summarize the contents of the letter  in one phrase “Resistance is futile.” Hezekiah knows the odds are against him. The heart of the matter was that his only hope was in God. So he has a time of serious prayer. “When things fall apart, get back to the heart.”

In answer to this heart wrenching prayer, God acts. Hezekiah receives a message from the other significant person of faith we meet in this chapter, the prophet Isaiah, “God says to Hezekiah ; I have heard your prayer.” He is promised that God will act. Mysteriously, that night, death sweeps through the Assyrian camp, striking down many of the troops. We don't know how it happened, but we do know it was enough to scare the Assyrians away and they never do defeat Judah during Hezekiah's reign.

Words are powerful things. People sometimes speak against us. Tell lies. Spread gossip. Things can be stacked against us. What can we do when that happens? The doorway of prayer is always open! “When things fall apart, get back to the heart.”

But be careful. If you offer a serious prayer, God may decide to get serious with you. Serious prayer should have a government health warning, “Warning, Prayer can seriously damage your skepticism and unbelief. It can have side effects of causing you to attempt the impossible, expect the unreasonable and may induce unexpected attacks of unexplainable joy.”  Isaiah could see things needed to change in the nation. So, like Hezekiah, he goes into the temple to pray. It gets serious.

While he is alone in prayer, suddenly the temple is filled with the glory of God. He can hardly stand it. Such is the intensity of this experience that he fears for his life. There is the sound of voices declaring “Holy, Holy, Holy, Lord God Almighty.” We read that “At the sound of their voices the doorposts and thresholds shook and the temple was filled with smoke.” Isaiah shouts out “Woe to me. I am a man of unclean lips and I live among a people of unclean lips.” (Isaiah 6:5)

This kind of thing wasn't supposed to happen when you wandered into church for a quiet prayer. He is told that his sin has been atoned for and his guilt taken away. God, in an instant wipes way any excuse he may have for not following God's call. So when a voice declares “Whom shall I send? And who will go for us?” he can't help himself.  “Here am I.” he says “Send me!” (Isaiah 6:8)

As part of our worship service we have a “Prayer of Confession” and  The Words of Assurance.” We confess that, like Isaiah, we are a people who fall short of what God requires. Yet we believe that in Jesus Christ, our sins find their match, that His righteousness is way more powerful than our waywardness, that His grace is more effctive than our unfaithfulness.

We use expressions such as “Christ died for our sins.” We speak of His death as our atonement. We sing hymns about being forgiven and set free to serve. We make the claim that Jesus has washed our sins away.

Part of chapter 16 of “The Story” features what are known as “the Servant Songs” of Isaiah, passages of Scripture which Christian theologians claim vividly predict the suffering of Jesus.  As an example consider Isaiah 53:3-5;

“He was despised and rejected by mankind, a man of suffering, and familiar with pain. Like one from whom people hide their faces he was despised, and we held him in low esteem. Surely he took up our pain and bore our suffering, yet we considered him punished by God, stricken by him, and afflicted. But he was pierced for our transgressions, he was crushed for our iniquities; the punishment that brought us peace was on him, and by his wounds we are healed.”

At the heart of Christian faith is the Cross. We love because He first loved us. We serve because He took a towel and washed His disciples feet. If we have truly experienced God's grace, then our reponse to God's call should be as authentic as that of the prophet Isaiah, who when he is pronounced forgiven and free declares, “Here I am. Send me!”

We look around at our world and we complain, “It's terrible. What's going on?” The gospel is that God not only knows what is going on but has a plan to put things right. That's the Good News. The challenging part of that news is that God's plan involves us doing our part by responding to His call to discipleship.

Who me? Change the world? We are either part of the problem or we are part of the solution. God isn't asking us to be Hezekiah.  God isn't asking us to be Isaiah. God doesn't need another Moses or another David or another Jesus.  God needs us. God needs us to understand that the little things we do that are motivated by His love are huge leaps forward for the cause of God's Kingdom. “When things fall apart, get back to the heart.”

Isaiah is supremely the one in the Old Testament who prophetically pictures the ministry of Jesus Christ. He is the most quoted Old Testament source throughout the New. He speaks of a future when not only Judah and Israel, but people of all nations would worship the One, True God.

How they would be offered freedom from oppression and how God would provide a 'Servant' to free people from the weight of their sin, by taking their sin upon Himself. He speaks of the coming of a Messiah who would be a righteouss King, who would be just and kind, who would bring healing and reconciliation. He speaks of a time at the end of all things when war will cease and death be destroyed and he envisages a new heaven and new earth.

Some tremendous lessons about faithfulness during times that this chapter describes as “The Beginning of The End.”

And remember that there is a bigger picture, a greater perspective. God is working out God's purposes. We may not always see it, but we are challenged to believe it! And to God's name be all glory. Amen.