The Story 19. The Return Home 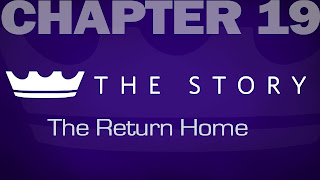 Since the beginning of the year, on many a Sunday, we have been following “The Story” of how God's chosen people were led out of Egypt and into a promised land where, despite God's injunctions that they do otherwise, they live such unfaithful lives that they end up exiled in Babylon. Periods of faithfulness occasionally blossom forth, but a lot of the time, they do not appear to be shining examples of God's love.

What does shine through though is God's unwillingness to give up on them. Despite peoples ability to completely mess things up, God's grace just keeps on rescuing them and God's plans just keep rolling on. Often times this happens in the most unexpected ways.

God has promised the people that they will return to their homelands. But how does this happen? Through a great Jewish leader? Through a rebellious movement of the people? No. The unexpected opportunity to return home comes at the hands of a gentile King called Cyrus.

As they return home, do things go smoothly? Of course not. New Beginnings can be traumatic. Particularly if there are those who don't agree with the way things are developing. An unwelcome feature of their returning is unwanted opposition.

You would expect those who returned and who were given a second chance would be faithful, right? Wrong. They quickly become very comfortable in their new situation and are fearful of rocking the boat particularly when there is talk of opposition. Such results in underutilized opportunites.

Sounds like three phrases to hang a sermon on right there...  'Unexpected Opportunity',  'Unwanted Opposition' and 'Underutilized Opportunity'. Let's think about each of those.

We know from Scriptures, such as Psalm 31, that the people were not happy being in exile. “By the rivers of Babylon we sat and wept when we remembered Zion.” (verse 1) There were individuals who prospered, like Daniel, but even he looked forward to a time when they could return home. But nobody figured out how that could happen.

God had a plan to raise up Cyrus, a persian King to fulfill God's purpose. How much Cyrus felt that was his destiny is not clear. What we do know about Cyrus is that he felt that the peace of his vast empire could be maintained by allowing fredom of expression to the different religious communities who were part of it. He is remembered for that.

As recently as 1994 a statue depicting Cyrus the Great was erected in a park in Sydney, Australia. The monument is intended as a symbol for multiculturalism; to express the coexistence and peaceful cohabitation of people from different cultures and backgrounds.

Some 150 years before he even came to the throne the prophet Isaiah had written, in Isaiah 45:13 “I will raise up Cyrus in my righteousness: I will make all his ways straight. He will rebuild my city and set my exiles free.” Josephus, (Antiquities of the Jews 11.1.2) the Jewish historian, stated that the Jews in Babylonian captivity showed Cyrus the prophecies of the Old Testament  which contained his name.That it was this circumstance that motivated the ruler “to fulfill what was written” and issue his edict permitting Israel’s return home.

Whatever you make of it, it was an unexpected opportunity the day it was declared throughout the Persian empire “This is what Cyrus king of Persia says: "'The LORD, the God of heaven, has given me all the kingdoms of the earth and he has appointed me to build a temple for Him at Jerusalem in Judah. Any of His people among you may go up to Jerusalem in Judah and build the temple of the LORD, the God of Israel... and may their God be with them.” (Ezra 1:2-3)

What I find fascinating is that not everybody took advantage of this unexpected opportunity. A door opened wide. But some said; “Nah. We'll stay here.” It may well be they stayed for a purpose. Or it may well be they were simply indifferent.

God does sometimes bring unexpected opportunities our way that we can choose to reject or to go with. Maybe the greatest open door of them all is the gospel message of the love of Jesus Christ that we will celebrate during our communion service. Laid before us is an opprtunity to redicate our lives to the service of One who gave His life for us that we may live free, forgiven, useful lives. There is no compulsion. Every communion service is an unexpected opportunity. But let us move on to consider...

Change creates fear. The arrival of the Jews back in their homeland, who suddenly set about building a grand temple to honor their God, did not fill their new neighbors with joy. They try various strategies to make things difficult. They say, “Hey, let us help you!” yet there intention is to mess everything up so the job can't be completed. We read in Exra 4:5 “They bribed officials to work against them and frustrate their plans during the entire reign of Cyrus king of Persia and down to the reign of Darius king of Persia.”

In a manner that reminded me of the way some opposing politicians kept hounding the president to produce his birth certificate, they question the Jews credentials in being allowed to return and rebuild. Ezra chapters 4 and 5 tell how emissaries are sent to King Daruis questioning the legality of the situation.

Darius issues an order to search the archives. The planned discrediting backfires as they discover the original decree of Cyrus to go home and build the temple. For their trouble, the opposers are odered to financially support the rebuilding work that is taking place. Opposition is turned to advantage.

None of us enjoy it when our grand ideas and schemes are called into question. It is not a pleasant experience when you receive push back against a vision or activity that you feel God is calling you to explore. If there is a message here about faithfulness it is that we should keep on trusting God, because God is able to turn unwanted opposition into unwarranted opportunity. Which brings us to a a final thought. Not unwarranted opportunity but...

The people start building. And it's great! We're home. The temple is a happening. Yet as the days go by, somehow, the fire just goes out of them. They start focussing on building their own homes and livelihoods, not restoring the temple. Maybe the discouragement of their enemies got to them in deeper ways than they had anticipated.

There is such a contemporary ring to those words. Materialism blinds us to spiritual priorities. Our consumer society is obsessed with obtaining the next thing, but nobody is content, everybody wants more, more, more.  “You earn wages, only to put them in a purse with holes in it.” There is an urgency in Haggai's words "Give careful thought to your ways.”

Underutilized Opportunity. Never has a generation, in the history of the world, been as blessed as ours with the resources to understand God's Word, with such a variety of ways to worship and serve, with such a field of communications laid before us to proclaim God's Word to all peoples and all nations.

Yet we struggle. We are busy building personal kingdoms and easily distracted from the goals of God's Kingdom. So much underutilized opportunity. I do not say that in a spirit of condemnation but as one who is as guilty as any other of not making the most of their opportunities to serve and grow in the life and love of our Lord Jesus Christ.

That's why I feel blessed to be around this table laid with bread and wine this morning. Throughout “The Story” we have learned about a God, not just of second chances, but who time after time after time presents to us unexpected opportunities to know the forgiveness and renewal and hope and joy that God's Holy Spirit can place within our hearts.

I know it's not easy. We are broken people, yet in God's eyes creatures of beauty that Jesus died upon a Cross to redeem. Unwanted opposition can discourage us and dishearten us and send us in the wrong direction. Yet no person ever suffered more unwarranted opposition than our Lord sand Savior. It took three days from the Cross to the Resurrection.  His living presence changed everything.

For sure in our lives we will encounter many Underutilized opportunities. But this day, this time, around this table does not have to be one of them. Let us then ponder the words of the prophet Haggai "Give careful thought to your ways.”

This place can be a spiritual home. This place can be a place of refuge. So come home. Like a prodigal son or daughter, trust in the Father's grace. Like the repentant thief crucified next to Jesus, recognize the love of God as being the genuine article. Like the returning exiles from Babylon “Give thanks to the LORD, for the Lord is good; God's love endures forever.” (Psalm 107:1)

And to God's name be all glory. Amen.