The Story 20. The Queen of Beauty and Courage 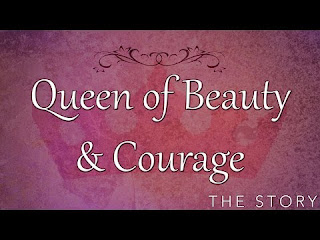 In our journey through the Old Testament we have reached the biblical Book of Esther. Esther is not a book that often gets preached on. Indeed there have been those in the history of the formation of the Canon of Scripture who suggested that it really had no place in the Bible. Why?

The book of Esther never once mentions God. The characters in the story are never pictured as praying. Neither do they observe any kind of religious worship. Some have even questioned the morality of a story that suggests that a nation is saved by a beautiful harem trained girl who is willing to sleep with a King. Thankfully the objectors were objected to and the story remains a great testament to how the faithful and courageous actions of an individual can profoundly shape history.

The story of Esther is set in the ancient land of Persia, at a time when the Persians were a major world power. It's the era and culture, which has given to us stories of Aladdin, the Arabian Knights and the Princes of Baghdad. The Jews are in some far away corner of the empire, in exile.

The King of Persia is the man of ultimate power. His palace is as though somebody had taken the Whitehouse, the Pentagon and the Playboy mansion and mixed them all together. It's the center for politics, war and worldly pleasure.When he throws a party it could last for months. If he had to give up either wine, women and song, you get the impression he'd give up singing!

And in the midst of this strange exotic land we find a pretty Jewish girl called Esther and her cousin, the older Mordecai, who is raising her as though she were his daughter. They have been exiled there after the deportation of the Jews from Jerusalem.

The story unfolds and we find that, during a drunken party, King Xerexes has summoned his Queen Vashti, to come and be shown off to the guests. “Look how beautiful she is!”

This was out of order, but, well, he was the King. He made the rules and could change the rules if it suited. Vashti refuses to come. The King becomes really mad, deposes her from office and sends a letter to everybody in the kingdom reminding all the women of the realm to honor their husbands... because they could be replaced!

He decides to replace Vashti by holding a competition. Every pretty young lady in the land is taken into the harem. They have a year to prepare themselves. Then, if when summoned they can please the King for a night, they have the chance to become Queen.  Amongst the ladies taken to the harem is Esther. Her guardian, Mordeccai, keeps a watchful eye on her progress by befriending some of the officials in charge.

After her time of preparation eventually Esther is summoned to the King. Things go well. The King is delighted by her and decides to make her Queen in place of the deposed Queen Vashti. Meanwhile, cousin Mordeccai spends a lot of time sitting at the palace gates, trying to keep up with all that was going on. He becomes aware of a plot to assassinate the King, he gets word to Esther, and Esther warns the King, who takes action to thwart the plot before it amounts to anything. The King intends to reward Mordeccai for alerting him of the dangerous siuation. So far, so good.

But… there's a bad guy in the court. Horrible Haman. Way back in “The Story” when we were looking at the life of King Saul, you may recall that one of King Saul's failures was in a battle against the Amalekites. The Amalakites were persistently wicked. They were the first people to try and stop Israel from entering into the land of Canaan.

The word of the Lord to Saul was that he was to go into the land and destroy them all. Saul thinks he has a better plan and allows 400 of them to survive. Horrible Haman is a descendant of one of those 400, and the story of his peoples defeat has not died over the passage of time. He has a real grudge against the Jews.

Mordeccai, the Jew and protector of Esther, completely refuses to do this. His action arouses Haman's prejudicial anger. Haman tries to have him killed, and when that plot fails, he sets about destroying the whole Jewish population.

We read in Esther 3:8-9  “Haman said to King Xerxes, 'There is a certain people dispersed among the peoples in all the provinces of your kingdom who keep themselves separate. Their customs are different from those of all other people, and they do not obey the king's laws; it is not in the king's best interest to tolerate them. If it pleases the king, let a decree be issued to destroy them, and I will give ten thousand talents of silver to the king's administrators for the royal treasury.'"

King Xerexes takes horrible Haman's advice and issues the decree. Mordeccai is fearful, not just for his own future, but the future of his people. He gets word to Esther, in the hope she will be able to have a word with the King.  But there's a huge problem. 'Having a word with the King' was not something anybody, particularly one of his wives, could be expected to do.. The rule was simple. You don't call the King. The King calls you. Break that rule and you die!

We read in Chapter 4:11 "All the king's servants and the people of the king's provinces know that for any man or woman who comes to the king to the inner court who is not summoned, he has but one law, that they be put to death.” There was, however, one get-out clause. If the King, when he saw a person approaching, held out his golden scepter, then they were allowed to live another day!

Esther makes a monumental decision. It was either lay down her life that her people may be saved or live with the knowledge that she could have done something to help. She puts on her best robes and makes her way to the inner court. By the Grace of God, the King is in a good mood and is pleased to see her. She arranges a party at which horrible Haman's dastardly plot is exposed and the King sees him for the nasty piece of work he truly was. Their bromance is over. Horrible Haman ends his days being hanged on a gallows that he was hoping to hang Esther’s guardian Mordeccai upon. Mordeccdai gets Haman's job in the Palace.

Haman's prejudicial poison has already begun to spread. But God is with God's people. After a time of struggle the Jewish people gain a restored position in the land. This restoration paves the way for their eventual reestablishment as a nation. Today, the Jews still celebrate their deliverance from destruction, a deliverance that came through the actions of Esther, in a festival known as the Feast of Purim.

We can read in Esther 9:28 of the institution of that festival. "So these days are to be remembered and celebrated throughout every generation, every family, every province, and every city; and these days of Purim are not to fail from among the Jews, or their memory fade from their descendants."

As the Jews are bid remember their deliverance during the festival of Purim, so every time we gather for worship we remember our deliverance, the salvation offered by Jesus Christ through His death upon the cross and His resurrection to life.

The book of Esther is set in a different world and a different time. Yet the heart of Esther, is the heart of one who was prepared to lay down her life rather than see her people perish. That message of self-sacrifice is one that speaks to all nations and peoples. John 15:12 tells us "Greater love has no person than that they lay down their lives for their friends."

This is so central to our message that we hang a Cross in the church as the focus of our deepest thoughts.We love because He, Jesus Christ, first loved us. We serve because He first served us. We forgive because He forgave us. We offer healing, because He heals us. We care, because He cares for us.

The book of Esther reinforces the idea that no life that is lived in the palm of Gods hand is ever without power or significance. As an orphan she had no family. As a Jew she was a refugee. As a woman in Persia she had no status or power. As a girl in the harem she was less than a slave... she was a disposable commodity. If you imagine the power structure of a Kingdom like Persia as being a huge pyramid with the King at the top, she was way, way, way, down at the bottom.

Yet consider how were the purposes of God were revealed! Through her powerlessness, completely against the odds, Esther became a savior of her people. She takes her place amongst the great women of the Bible, who used whatever power was within their means for overthrowing seemingly invincible enemies.

As we have travelled through the Old Testament portion of “The Story,” we have read of Rahab, the prostitute who sheltered Israelite spies and saved her families life in the process. We met Ruth the Moabite, who became the ancestor of the great King David. We learned about Bathsheba, the betrayed wife of Uriah, who used the little power she has to assure the succession of her son Solomon to the throne of ancient Israel.

In the New Testament we read of those like a Samaritan woman in John's gospel, who argues with Jesus and gains a blessing. We read in Luke’s gospel of a woman who anointed Jesus' feet with costly perfume. She had no power in her society.  She was, we're told, an immoral woman. But she used what she had, the power within her grasp, to anoint Jesus, the ultimate embodiment of God's love for humanity.

We read of Mary of Nazareth, the mother of Jesus, who, in Luke 1:46-48, states, "My soul magnifies the Lord, and my spirit rejoices in God my Savior, for He has looked with favor on the lowliness of His servant"

In the midst of a world full ofconflicts and power struggles and arrogance that often turns it's back on God... we are called to follow One, who in an act of powerless surrender,  revealed the true power God's love. Whoever we are, woman or man, adult or child, rich or poor, those whom life has dealt a poor hand to or those who have been blessed beyond measure, we are summoned to remember that Jesus Christ died for our sins and was raised that we may walk in the freedom of His love.

Like Esther, may we be empowered by the Holy Spirit, to become people who make a difference. Esther, a young orphaned girl who had nothing going for her but a pretty face and a loyal heart, who lived in an alien land where many of the rules we take for granted in our culture simply didn't apply, brought down the powerful and saved her people from destruction, an act that the Jewish people celebrate at their annual festival of Purim.

Let us pray that God will place holy hands upon the rough clay of our lives and squeeze us and mould us into something beautiful for His Kingdom, some thing unique and true, a special creation that only we can be. Let us recognize, that the possibilities that God's love opens up to us, are truly awesome!