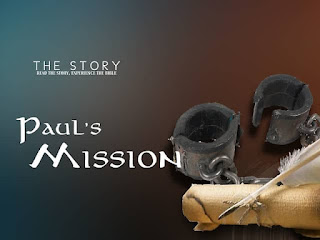 As we continue our journey into the latter chapters of “The Story” we will focus the next couple of weeks on the apostle Paul, a one-time opponent of the Christian faith who became it's greatest interpreter. In chapter 29 we are given an account of Paul's visits to cities such as Philippi, Ephesus, and Corinth, names familiar to us because of the letters he would later write to them that became Biblical books.

We observe how he follows a pattern of going firstly to preach in the local synagogue, to draw a congregation from the Jewish population, but then moves on to the town square, where he seeks to address the Gentiles and let them know that the message of Jesus Christ was also for them.

He receives opposition from both secular and religious authorities. Secular, because he is outspoken against idolatry and pagan practices, activities that formed a significant part of the financial and social structure of many Roman provinces. His message was seen as being bad for business. To the orthodox religious authorities it was a challenge to their power. They brand his “good news” as heretical and dangerous, ironically a position that he himself, when known as Saul, once totally ascribed to.

In many places Paul visits, he barely survives. He experiences arrests, beatings, and imprisonment. Yet God's Holy Spirit is mightily at work through him and we witness miraculous escapes, and testimonies of miracles and healing. At one point the local residents believe that Paul and his colleague Barnabas are gods, something he is anxious to refute!

The second part of Chapter 29 offers excerpts from the letters Paul wrote to the churches. These writings become the bedrock of Christian theology. Many of the letters are written as answers to questions that arose in the earliest life of the church. Important themes shine through.


He answers questions on church order and practice and behavior, some of which seem universal in application, others that appear to be associated with the cultural context of the community being addressed. Because of that he can at times seem obscure. He is easily misinterpreted and misrepresented.

Though this chapter in “The Story” is given the title “Paul's Mission” I suspect he would be the first to say that whatever he achieved, all glory was to be given to God, for without the presence of the Spirit of Jesus Christ within him and around him, he could do nothing. That is not to say that he was not an incredibly gifted, able and uniquely placed individual, rather that Paul's mission was the same “Upper Story” mission we have been reading about since we looked at the first chapters of Genesis.

What was new and radical about Paul's teaching was that kingdom life was not confined to any chosen group of people or through obeying a particular set of rules. God's love was available to all though faith in Jesus Christ.

Paul often speaks in his writings about the importance of coming together in fellowship around a table laid with bread and wine, as we are doing this morning. He saw communion as one of the most special gifts Jesus gave to His church.

In 1 Corinthians 10:16 Paul asks a question; “Is not the bread that we break a participation in the body of Christ? Because there is one loaf, we, who are many, are one body, for we all share one loaf.” The context of the question is that in Corinth, an extremely multi-cultural, multi-faith environment, sometimes at meals, or even down at the market when folk were out getting their groceries, the food on offer had been dedicated and offered to idols.

There is a division of opinion in the Corinthian church. Some suggested that if they ate the food, they were doing something terrible that compromised their spiritual lives. Others were saying, “Ah. Forget about it. Doesn't matter what you do. Didn't Jesus die to set us free from rules and regulations?”

To help them reconcile their differences he offers an invitation. “Come to the table.” In chapter 11 of 1 Corinthians he gives them the words of institution we say every time we meet for communion. “The Lord Jesus on the night when He was betrayed took bread, and after giving thanks, He broke it and said, “This is my body, broken for you.”

“People,” he says “Think about what you are doing when you eat this bread and drink this wine! Church? It's not about you and your rights and your opinions. It's not about “Oh they shouldn't be doing that” or “Get off my case, I can do what I like.” It's about demonstrating the love of Jesus Christ. It's about participating together, in the life of Christ, who died that we may be as one body, sharing His love with a needy world. Look at this table? What do you see? One loaf. “Because there is one loaf, we, who are many, are one body, for we all share one loaf.”

It's an appeal for unity, unity based on consideration for others. Unity found through allowing Jesus to be the measure of our actions. Jesus who came down from heaven, denied Himself all kingly glory that was His, and lived and died and went through hell for every one of us in order that our lives may be reconciled to God.

Paul's Mission? Because he understood what Jesus had done for him, he was prepared to go through all the troubles that presenting the gospel brought his way. Because he believed with all his heart, that the salvation of humankind depended on the gospel being preached to all the world, he was prepared to give his all to seeing that churches were planted and grown and became vibrant power houses for spiritual renewal and communities where people got to experience the life changing love of Jesus Christ.

So when Paul writes “Is not the bread that we break a participation in the body of Christ? he is not saying “Isn't it nice to think about Jesus by sharing bread and wine?” He is pleading with his readers to be a part of what Jesus had started, part of a revolution that began in Galilee, to be people who change the world by participating in actions and deeds and programs that the Holy Spirit had placed within their hearts and upon their lives. “That” he says “Is being church.” That's what participating in the body of Christ is about.

He recognized that in communities (yes, even God-birthed church communities) it was so easy to become caught up in arguments and disputes that had very little to do with the gospel. He saw it happening time and time again and his answer was, “Come to the table... consider what Jesus has done for you and participate in doing that for each other. Maybe, if you can do that, then this world that so desperately needs the love of God will sit up and take notice!”

Paul's mission, like the mission of Jesus, can be summed up in one word. “LOVE.” I've sat in bible studies where people have said, “Well, didn't he say this” and 'Wasn't he wrong about that” and I'm thinking; “Look when you have the courage to lay down your life for the gospel like he did, then you can get on your high horse.”

But that is very much the kind of thing Paul wouldn't say. I think what he would say was “Come and sit with me at this table. Come and participate in breaking bread and drinking wine. You see that bread? That's the body of Jesus. You know He died on a cross, allowed His body to be tortured and broken, because He loved us. And there was I doing everything in my power to destroy His message. I even helped others kill and persecute His followers. Can you believe that someone like me could be forgiven and used in His service?

And that cup. It's His blood. His life. His love. A man called Isaac Watts wrote a song about it. “See from His head, His hands, His feet, Sorrow and love flow mingled down! Did e’er such love and sorrow meet, Or thorns compose so rich a crown?” What kind of crazy love is that? When we bless the cup of blessing we are sharing in the blood of Christ. When we break the bread we are sharing in the body of Christ.”

“And” Paul would insist “You do know, don't you, that Jesus didn't do that just for me? He did that for all of us... which includes you. I don't know what you may be struggling with or going through right now, but my Jesus lives and loves and I know He can help you through whatever it is. You're in the right place at the right time!”

Paul's mission. As we gather around this table let us pray we are granted a glimpse of the love that so inspired Paul to give his life in the service of our Savior. Let us seek for God, through the influence of the Holy Spirit, to empower our lives with the resurrection presence of Jesus Christ. And to God's name be all glory. Amen.